Facing the increasing tensions in Ukraine, the viaGood team decided to learn more about the threat of nuclear annihilation. We traveled to South Bohemia, to view the ATOMMUZEUM located in the former nuclear ammunition depot. It is situated close to the borderline which used to be known as the Iron Curtain, as is indicated on the map below: 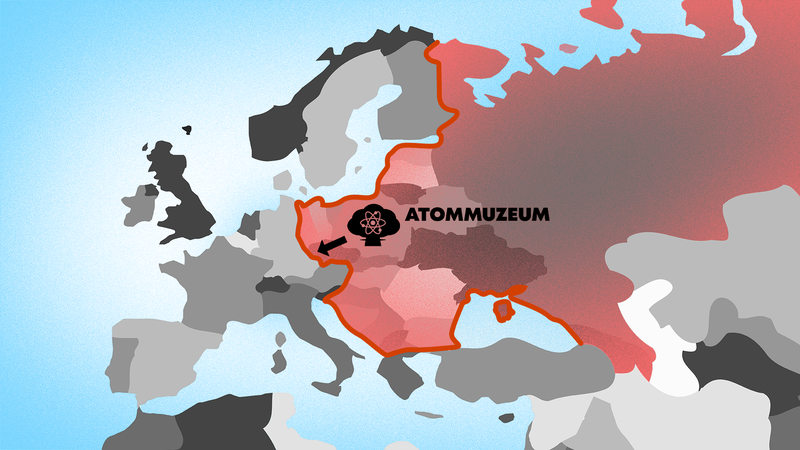 The Iron Curtain, an impenetrable border between Western and Eastern blocs, existed from the end of World War II in 1945 to the end of the Cold War in 1991.

The ATOMMUZEUM is curated by Vaclav Vitovec, the founder of the IRON CURTAIN FOUNDATION which was established in 1999. The purpose of this unique museum is to warn mankind about what could happen if destructive nuclear energy were uncontrollably unleashed.

Hidden in the heart of dark forests, the depot used to be the most guarded and secret site in the former Czechoslovakia. From 1968 to 1990, only Soviet soldiers had access to this heavily guarded military area. It is therefore understandable that, at the opening of the ATOMMUZEUM in 2013, public interest was huge. 2 500 people gathered at the site, although only 1 000 obtained entry on the first day. This special museum is being frequently visited by tourists, politicians and journalists from the whole world.

It was an honor for us to meet Vaclav Vitovec, who welcomed us, opened the 6.5-ton door and led us inside. Upon entering the bunker, we immediately experienced cold shivers. Here, history has left its daunting footprint. We gazed around in shock. This is where nuclear warheads capable of demolishing half of Western Europe had been stored.

Similarly to caves, the temperature in the depot rarely exceeds 7 degrees Celsius. Tons of concrete above and below guaranteed the stable low temperatures for stored missiles. We had been warned in advance, so despite the summer outdoor heat, we were wearing heavy boots, long trousers, sweaters, coats and hats. 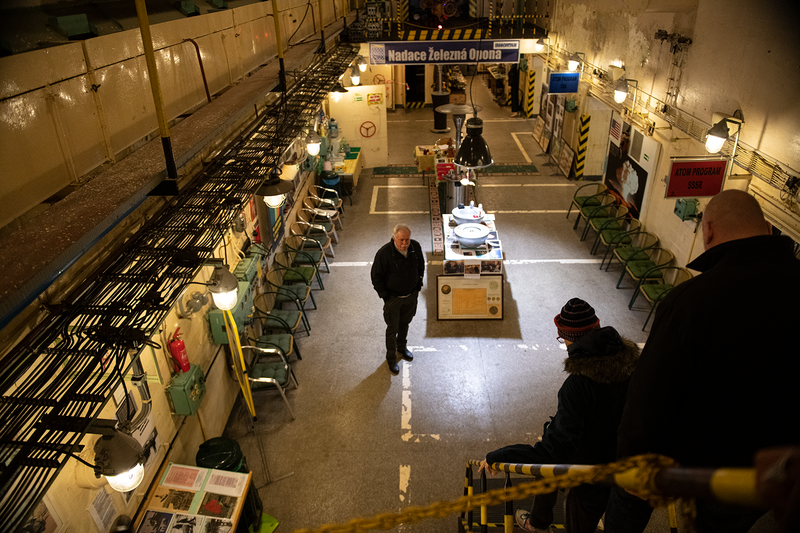 The exhibition in this former depot for Soviet nuclear ammunition recalls the time when East and West were preparing for a possible nuclear conflict.

We were clearly in the underworld, in a place of death. The feeling grew even stronger when Vaclav Vitovec mentioned that the remains of 4 000 Wehrmacht soldiers had been stored in these premises. The cold halls had been filled with coffins, before Germany carried the remains off to be buried appropriately elsewhere.

The impressive underground bunker occupies an area of 5 000 square feet. Each of the four halls, where nuclear missiles used to be stored during the Cold War, is dedicated to a certain topic today. The first hall to the Cold War, the second to the Soviet Nuclear Program, the third to the US Nuclear Program and the Manhattan project managed by Robert Oppenheimer, the fourth hall to Nuclear Power Stations producing electricity, including the nuclear accidents at the Chernobyl (1986) and Fukushima (2011) nuclear power plants.

During the two hours we spent in the ATOMMUZEUM, we were given a detailed and fascinating tour of the history of nuclear weapons. Our guide interspersed the dismal facts with his own experience of nuclear submarines, nuclear ramps, testing sites and power stations in many countries around the world. In his quest for knowledge, Vaclav Vitovec has met high-ranking military officers, technicians and politicians. 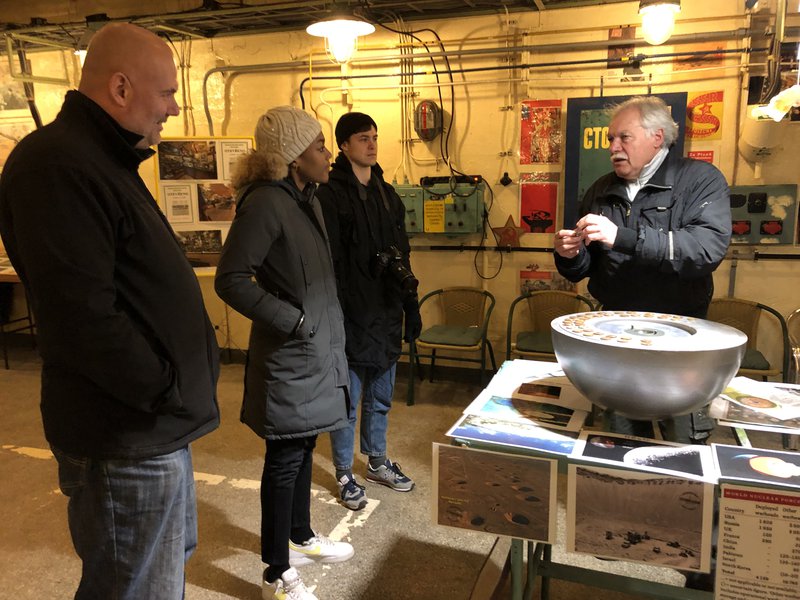 During our ATOMMUZEUM tour, we learned many alarming facts and our perspectives changed. Like when Vaclav, standing beside a model of the core of a nuclear bomb, shared some more shocking information: The weight of plutonium which split and transformed itself into energy to destroy Nagasaki is exactly the same as that of a CZK 50 coin. That is 0.3 ounces - such a small quantity of plutonium killed 50 000 Japanese civilians in a fraction of a second!

The two nuclear bombs dropped on Hiroshima and Nagasaki in 1945 killed a total of nearly 200 000 people, however, the hydrogen bombs of today are 1 000 times more destructive! It is no surprise that Vaclav Vitovec is a zealous pacifist.

People who are concerned about the future of our planet should visit the unique ATOMMUZEUM to learn more about the problems facing the world today. The exhibition will leave a lasting impression also thanks to being presented in a former underground nuclear bunker. As stated by Vaclav Vitovec:

"This nuclear weaponry depot is unique because it is really the only one in the world which has survived. The other ones located in our friends’ countries in Poland, Hungary and Bulgaria, all those bunkers and nuclear weapon depots were liquidated."

We have great respect for the education that the IRON CURTAIN FOUNDATION provides. That is why we are already preparing a follow-up blog post about the ATOMMUZEUM, as well as a video coverage of the tour. Stay tuned!

Read more about the ATOMMUZEUM at: