The maintenance of power and oppression in the name of nature

It's interesting to look at how Christianity has viewed drylands and how that view has shaped our approach to arid areas and their management today. Christianity, along with Judaism and Islam, has its historical roots in the arid regions. The Old Testament tells of Moses going up Mount Sinai (now Egypt, Sinai Peninsula) where God gave him The Ten Commandments. This view, however, changed quite quickly - a negative view of the arid regions was developed, and their inhabitants came to be associated with a kind of suffering or even punishment for the original sin. 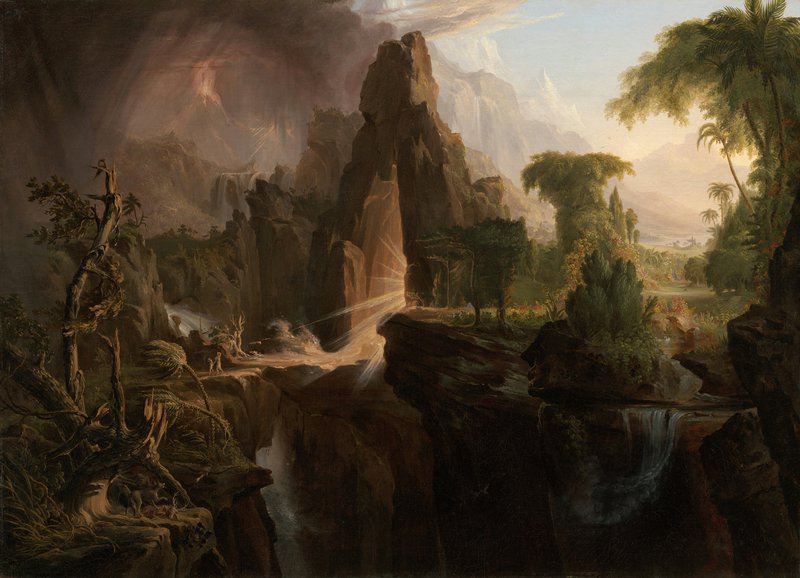 Thomas Cole, Expulsion from the Garden of Eden 1828

In the painting Expulsion from the Garden of Eden, Eden is depicted allegorically as something that takes the form of a green, flourishing landscape, but the inhospitable, arid region is represented on the left. This soon created a perception of dry areas as something that is the opposite of paradise. The Western perception of nature is encapsulated by green forests, pastures, or even a green savannah which is directly opposed to dry areas. Drylands were perceived negatively, were associated with suffering, and took on the role as punishment for the original sin. At other times, from a Western perspective, desertification came to be associated with punishment for inhabitants who did not live in accordance with Christian tradition or did not have enough faith in (the right) God.

This view was also adopted by early colonists, when Europe began to expand into North and Sub-Saharan Africa, carrying with it a view of the desert as a kind of corrupted form of nature.

A perfect illustration of how the Western view of arid regions was formed is through the colonial forester Louis Lavauden, who believed that the arid lands - deserts and semi-deserts were the result of deforestation by local inhabitants, their primitive attitudes, and overgrazing. These factors, he said, had turned a previously green landscape into an arid one.

Louis Lavauden was not only a forester, he was also a representative of the colonial administration in North Africa and was involved in the development of regulations and policies that then directly affected the lives of the local people. Many scientists and high-ranking civil servants at the time shared a very similar view. It is this view that gradually transformed into what we now know as: the colonial crisis narrative.

In general, colonialists perceived the inhabitants of arid areas as backward in their thinking, and their management of the natural regions was seen as unproductive to the point of being detrimental to the ecosystem.

However, this narrative soon came to be used as a justification for controlling local nomadic tribes and then was used to justify the seizure of land and its resources, the creation of rules, and their (often violent) enforcement. These rules included, for example, taking away the right to use an area as grazing land, which, as it later turned out, had a profound impact on the territory.

Nomads were settled, grazing was restricted, and attempts to 'replant' the forest became increasingly common.

Why, then, even after the decolonization era of the 1960s, are governments still adopting this model - the mindset and attitudes that colonists came up with? Why did the new African elites continue to take an unfavorable view of the drylands?

Because this narrative served as the perfect justification for the maintenance of power and oppression of pastoralist communities. All in the name of good governance of nature.

From this brief glimpse into the past, there is a myriad of implications for the present that we must now confront. It is time to not be afraid to question (and abandon) old narratives and to admit errors. We must be mindful of the diversity of cultures. For it was the innocent idea of the forest as an ideal, fruitful landscape and of arid areas as something that ought to be fixed - greened and brought back to life - that has justified the oppression of several generations of pastoralist tribes and has caused widespread damage to arid ecosystems, which have been shown to function in a fundamentally different way from the ecosystems we encounter in much of Western civilization. The presence of humans and livestock is crucial to arid regions and their functioning - but more on that next time.